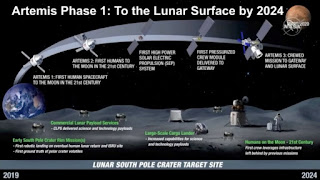 This spring, Vice President Mike Pence directed NASA to send the first woman and the next man to the Moon by 2024 and to go to Mars in the 2030s. NASA's Artemis project will partner with commercial space to make this a reality.

Almost sixty years ago, our highest technology was being stretched and invented for the near-impossible task of, as President Kennedy said, "landing a man on the moon and returning him safely to the Earth." Today, we have the technology--that's not the issue. It's not really even an issue of money; the total budget for NASA is less than one half of one percent of the Federal budget, yet at its peak, NASA's budget during Apollo was four percent of the budget.

So, just an extra billion or two a year buys America a bright, bold and inspiring future leading the world into a new space age. This time to stay. Together with new commercial partners like SpaceX, Bigelow Aerospace, Blue Origin and many more ventures, we will build bases on the Moon, and with lessons learned go to Mars in this generation.

The challenge today is all about the politics.

Politics can sink our future leading humanity to the Moon and Mars. Politics can crush the dreams of kids hoping to go to space one day. Politics can ignore the threat from China to the free world and commercial space having access to the Moon, orbital space and even Mars.

But politics can also make it happen if members of Congress understand the stakes and the opportunities--and the incredible payoffs to our economy and scientific progress. Sure there's budget pressures, but a small increase to the NASA budget can make it all happen--and everyone can take the credit.

That's where you and the Coalition to Save Manned Space Exploration can play a role.  Your phone calls, letters and visits to your members of Congress can make a difference. You can also call members on the Science and Appropriations committees, because they write the bills and budgets.

Save Manned Space advised all 2016 candidates, the Trump transition and President Trump's administration to return to the moon by 2024--the end of a possible second term. In 2020, we will increase our efforts to persuade Congress to provide the budget necessary to return to the Moon in 2024.

That's the lesson from President Bush's ill-fated plan to return to the Moon: it was stretched out and never accomplished anything inspirational during his presidency, allowing the Obama administration to kill it and replace it with nothing.

Let's make 2020 the year we get the return to the Moon on a solid track that can't be killed by anti-space politicians. This is about realizing President John F. Kennedy's legacy, and all the dreams and hopes of both children and entrepreneurs.

Your help with a generous donation can assist our efforts in 2020.

Thank you very much for your support this year and for next year.