Mars-Venus Flyby: The First Space Priority for the President

There is no doubt that as president, Donald Trump will set NASA back on track towards sending Americans to the Moon and Mars.

The Obama administration cancelled without replacement all plans to return to the moon and go to Mars. We lost at least eight years, and gave China and Russia a similar head start. Thankfully, Congress refused to cancel the rocket that can take us to the Moon and Mars, and in the FY 2016 budget has mandated building a transit habitat for long-duration missions such as the Mars-Venus flyby and for Mars landings, offering the new administration the ability to get busy with little delay.


In just eight years in the 1960s, we went from Project Mercury to landing on the Moon. In one decade we built the International Space Station. In one decade from today we could have a Lunar base, and in less than two decades we could make history with a Mars base.

Here's how to get NASA back on track:

President Trump must direct NASA to cancel the "Asteroid Redirect Mission (ARM), and replace it with the 2021 Mars-Venus flyby. This would be the kickoff mission for a renewed space program which would put us on a real "journey to Mars."

The 2021 flyby opportunity is too good to pass up, and it can be accomplished in the given timeframe because most elements are currently in development.

It will be the "Apollo 8" for Mars; that is, it will validate the technologies for missions to Mars in the same way as Apollo 8 proved we could get to and from the Moon before daring to land. As a bonus, the 2021 window offers the rare opportunity to flyby Venus as well.

The flyby mission will take our space exploration program out of "Scrub" and put it into "Launch," and get underway a relatively simple but breathtaking mission which will inspire youth, the general public, as well as Congress and opinion leaders. It will force the development of key technologies for Mars missions a decade or more earlier than would otherwise happen.

The flyby will get us back in space while the administration readies the national space strategy which will take Americans to the Moon and Mars sooner than we have been led to believe is possible.

It is important to contact President Trump; advocating a return to a bold space program worthy of the United States, and to avoid merely watching as China and Russia seize the lead in space for a generation. Suggest they use the flyby as the replacement for the ARM, and as the immediate goal for NASA while they develop the long range space strategy.

China and perhaps Russia will begin their conquests of the Moon in the early 2020s, and prepare for Mars missions in the 2030s. Given China's increasing threats of war to seize the South China Sea in violation of 400 years of freedom of the seas, we must not assume China will not try to claim the Moon and Mars as their own property.

Restoring America's leadership in space must therefore become a part of NASA's mission.

There are different 'selling points' for the space program which will resonate. Restoring the legacy of JFK's leadership, creating many new high tech jobs, spin-off advances in green energy and environmental technologies. National security concerns from ceding space to the tyrannies, undoing the damage the current president did to our future as the leader in space, advancing U.S. high tech competitiveness, making America great again, and restoring international respect and national prosperity.

The 2021 Mars-Venus flyby enjoys great support in Congress, with NASA engineers, and among space experts and advocates. It is easier to accomplish, more exciting, and offers far greater returns than the ARM; and will fit into current budget projections.

Replacing the ARM with the flyby is the best possible short-term goal for NASA, and one which will inspire the public and Congress to overwhelmingly support a real return to the Moon in the 2020s and a real journey to Mars in the 2030s. 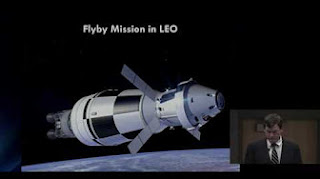