Today, two veteran NASA astronauts, Robert Behnken and Douglas Hurley, boarded their Crew Dragon spacecraft, the Falcon 9 was fueled and readied for launch, spectators in the region and millions around the world eagerly waited the launch, the President and Vice President were in attendance. All eyes were on the rocket and the countdown clock. The countdown proceeded.

All systems were "go for launch," but the weather was doubtful. The ground crew waited until the very last minute, hoping that clouds and weather would clear.

But the weather didn't move out soon enough. Ground control jokingly asked "could you give us ten more minutes," but they knew that was impossible, and the historic launch of American astronauts flying on American rockets was 'scrubbed' until Saturday, May 30.

Safety is always number one, and launches are frequently delayed for weather or equipment issues. You want everything exactly right.

Some may be curious why the launch wasn't just delayed until the storm moved away. The simple answer is that for many launches, and especially for launches to a moving target like the International Space Station, the "launch window" can be only a few minutes wide or even "instantaneous," meaning that the launch must happen right at a specific moment.

Had they launched just a few minutes later, the space station, orbiting at 17,000 miles per hour, would have traveled beyond the intended rendezvous point and required too much fuel to catch up to it once in orbit.

Our astronauts will reach the space station soon, and SpaceX and Boeing will before too long, begin taking tourists and scientists on commercial flights, whether to ISS or just to orbit, and one day, to commercial hotels and labs in orbit.

Countdown to Americans on American Rockets! 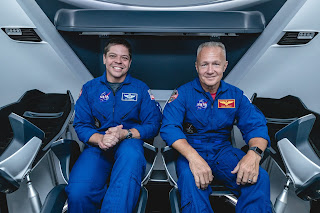 Meet Bob Behnken and Douglas Hurley, both experienced NASA space shuttle astronauts will launch to the International Space Station on May 27, heralding the return of American astronauts flying on American rockets, rather than the Russian Soyuz.

You'll want to watch this moment in history! If you are in Florida, you'll see the marvelous 'rockets red glare' rise to the heavens at 4:33 p.m. EDT, and watch online at www.NASA.gov/NTV, with coverage starting about an hour beforehand. Near the Kennedy Space Center, here's the best viewing locations.

Learn more about this incredible mission at NASA and SpaceX.

If the launch is delayed, such as for technical or weather issues, the launch may be rescheduled for the next day or when issues have been corrected.

America is in a new space race with China, and regaining our own crew launch capability is vital for strategic reasons. China intends to dominate space in the same way they are planning and attempting to do in the South China Sea, Hong Kong and even Taiwan, and their goals include declaring 'vertical sovereignty' where no satellites, space stations etc. could fly in orbit over China, and to similarly declare ownership of the only area of the Moon suitable for long-term habitation, the water-ice-rich south pole.

President Trump has restored our return to the moon by 2024, which I advised the Trump campaign and White House was essential, which will not only help secure access to the Moon by the free world, but also spark a tremendous birth and growth of commercial and tourist enterprises on the Moon, as well as giving us the experience needed to go to Mars in the 2030s.

Additionally, President Trump and NASA have written the "Artemis Accords," which all free nations should agree to and which will be required of all our space exploration partners. These accords represent the establishment of the rule of law in space, with rules to protect private enterprise and property in space and on the Moon and Mars.

Because of Democrat obstructionism in the House of Representatives (and the possibility a Democrat president could again cancel the return to the Moon--and award the high frontier to China's rule), it is vital to keep lobbying the House Science committee to keep the Artemis lunar program on schedule for 2024 and to not enact a NASA authorization or appropriation with poison pills and cuts to derail our progress and the essential timetable.

The Coalition to Save Manned Space Exploration has been meeting with Congress this year on these urgent priorities, often explaining the largely-unreported strategic aspects of our civilian and commercial space programs.

The future of access and commercialization of orbital space and the Moon must belong to all, not just China.