Actions YOU Can Take to Support a Successful Space Program

There are many things YOU can do to promote the space program.
Together we CAN get back on track in space and not surrender our jobs and economic future to other nations!
No comments:

A Chilling Reminder of Why Cancelling the Shuttles Endangers ISS

This morning, a piece of space junk or a meteoroid came within just 850 feet of the International Space Station, and to protect the crew they sheltered in Soyuz capsules in case of damage.
Space.com/12091-space-junk-astronauts-station-soyuz-shelter

Space is never safe or predictable, and today's event underscores the risks created should there be damage or a failure of a large component for which there is no replacement. An example might be one or more solar or cooling panels being damaged by space junk. Indeed just a year ago, a large cooling pump failed, and while there were replacements, what if those are used up over the next few years? They are too large to fit in existing or planned cargo freighters, and the logistics of such a launch and rendezvous might take far too long to save ISS.

In response to my question to NASA and Congressional experts to the question "What contingency plans exist for launching large and critical replacement items;" the answers I have gotten are that there are no known plans. If any such plans were ever made and just filed away so key people today don't know of them, it is time to recover them so immediate action can be taken if ever needed. Further, having plans but no will to actually use them in spite of the cost and complexity to save ISS in a timely manner would be as bad as having no plans. Immediate action would be needed to fit the item in a payload fairing and with precision rendezvous with ISS so it can be captured by a robotic arm.

At the minimum, Atlantis and Endeavour should have been preserved and kept on "launch on need" basis, and the ideal solution would have been to accept United Space Alliance's offer to continue to operate them for less than current costs. Maintaining such an "insurance policy" would cost just a few billion a year, yet it would protect our estimated $100 billion investment in ISS.

Congress must demand NASA create--and be ready to implement--contingency plans for launching critical replacements to assure ISS need not risk being lost entirely or having modules closed and crew reduced in the event of an emergency for which a single shuttle launch could have saved the day.

Keith Reed cuts through all the phony excuses to reveal the truth. We CAN go to the Moon, Mars and beyond but our leaders just don't want to and just don't care if China and others take over leadership in space and technology. The problem is NOT technological or even budgetary (we could go to Mars for a fraction of bailout or Iraq/Afghanistan costs); the problem IS willpower--Americans can do anything we set our minds to; yet as it stands currently, Americans will never leave Earth orbit absent a dramatic reversal in leadership.

Read and share the article and you'll see Mr. Reed is spot on in his analysis:
Startribune.com/opinion/otherviews/124108644.html

This is a national disgrace."

Please read and forward to others his entire article, it's worth it if you are concerned about our nation's future.In other words, it took us 66 years to go from the dunes of Kitty Hawk to the plains of Mare Tranquillitatis, yet almost the same time will elapse between Apollo 17, the United States' last manned lunar mission, and when the next person might continue with this exploration.

The author also correctly identifies the Augustine Commission as a turning point from ""We can." to "We can; we just don't want to." Indeed, the entire purpose of the Augustine Commission from the start was was to lay the case for "we just don't want to." Absent a complete reversal in leadership, Americans will never leave Earth orbit again in spite of apparent (but half-baked) plans, and will only watch as the rest of the world leaves us in their dust both in space and economically.

This is why the Coalition to Save Manned Space Exploration was founded (www.SaveMannedSpace.com) to create and implement a workable strategy to build grassroots support for a bold, JFK-like space program which will then force the politicians to take real action; to once again follow in JFK's footsteps by following his prescription for success: We choose to go to the moon in this decade and do the other things, not because they are easy, but because they are hard, and The exploration of space will go ahead, whether we join in it or not, and it is one of the great adventures of all time, and no nation which expects to be the leader of other nations can expect to stay behind in this race for space. (JFK at Rice University, 1962)
No comments:

Americans do not want our space program to be cancelled, and many polls support this. Below is the latest poll. Please send this to your Senators and Representative, as well as to the President.

"In a dramatic new Sachs/Mason-Dixon poll, an overwhelming majority of Americans say they don’t want America’s manned space program to end and they believe the United States should continue to be a global leader in space. The results of the poll follow the recent return of the Space Shuttle Endeavour – the penultimate NASA Space shuttle mission."


QUESTION: NASA is close to launching its final manned Space Shuttle and our nation's space program faces an uncertain future with no plans to continue sending men and women into space after 2011. Do you believe the United States should or should not continue to be a world leader in manned space exploration?

Historic Photographs of the Shuttle Endeavour and the International Space Station

Absolutely stunning photography! On May 23, 2011, when space shuttle Endeavour was docked to the International Space Station, astronaut Paolo Nespoli took a series of historic photos of the shuttle at the station as the Soyuz spacecraft departed. This sight has never before been photographed together from a distance, and due to the shuttles' premature retirement, will never again be possible. Together, they represent perhaps the greatest technological feat of mankind, and perhaps the most complex machinery ever built. As Soyuz moved away from ISS, the entire station was turned to allow a variety of views to be forever recorded. The station itself was rotated rather than the more nimble Soyuz maneuvered so as to keep the views out of the sun. (click each photo for full size).
﻿﻿﻿﻿ ﻿ 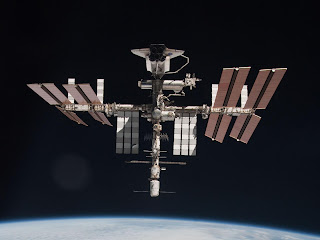 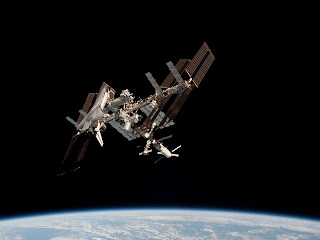 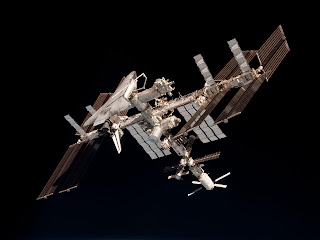 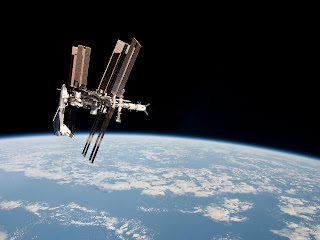 You can see Endeavour's Canadian robotic arm extended around to her underside, perhaps inspecting tiles for damage. The arm was transplanted before her departure to serve continued duty on ISS.

Here's the link for the complete set of photographs. Save them to your computer and you can make them your desktop image. Credit NASA/Paolo Nespoli.
http://www.nasa.gov/mission_pages/station/multimedia/e27depart.html
No comments:

The final shuttle launches have been primarily used to stock up the space station with critical supplies which can't be delivered on small Progress or other launches.

Yet these supplies will not last forever, and any delays in new rocket launch systems could endanger the ability to support a crew of six.

A far greater threat to ISS exists in the event of a single accident or failure of a critical component for which there is no replacement onboard.

It is unlikely but possible that meteoroid or space junk could damage a cooling or solar panel or other large critical system. If there is no replacement, what happens? Post-shuttle, it could take far too long to custom-engineer a rocket to deliver such a replacement.

Congress must demand and get the honest facts on what--if any--contingency plans NASA has for delivering such large and critical components in a timely manner. Simply, no plan could result in the potential loss of ISS.

If there are not specific, detailed plans for each possible scenario which actually can be implemented in a reasonable length of time, then we must put on immediate hold the irreversible decommissioning of the shuttles and their workforce and infrastructure. This includes plans with funding to use a particular rocket and how to fit such components into a fairing, and how to dock the payload with ISS. Just stating it is no problem to launch such components, and that plans can be made if or when needed is a prescription for disaster.

If the shuttles could be saved at this late date, it is not just a matter of preventing Endeavour and Atlantis from being irreparably gutted for display, it is preserving the workforce which can actually launch an emergency mission and having the launch pad and other critical items themselves not be dismantled. It means producing or locating several more external tanks (there is one on display at Kennedy Visitors Center, for example). But agenda item number one is to postpone Endeavour and then Atlantis from being carved up internally for safe display until contingency plans have been confirmed.

It is incredibly irresponsible to endanger the space station if there are not having specific plans for every major threat to ISS.

This week and maybe for a short time beyond, gutting of Endeavour will not have proceeded to the irreversible stage and the offer made by United Space Alliance to take over Endeavour and Atlantis for five years and offer services to NASA at lower cost than current.

Congress could make such a stink that NASA has no option but to accept the offer.

The space station is a $100 billion investment in our future in space, and must not be held hostage to political decisions and apparent penny-pinching.

In addition to endangering the space station, losing independent access to space and a host of other reasons; scrapping the space shuttle program costs jobs and irreplaceable institutional knowledge.

Many jobs have already been lost, and today, Boeing announced yet more layoffs.

Drive around the Space Coast area of Florida and you'll see the signs--the boarded up homes and businesses. It's just beginning and as the soaring jobless stats reveal, America can't afford to lose more jobs, especially highly skilled jobs.

Meanwhile, Russia, China, India and others are expanding their space programs. It should not take a rocket scientist to realize firing rocket scientists contributes to America's economic decline. We could learn something from China, Russia and the others who have set their nations on the road to the Moon, Mars and beyond--it is their economies which are growing, and ours contracting.
2 comments: