Please make these important calls to Congress today to stop a dangerous transfer of American space technology to China.
Ask them to take action to block the Loral satellite deal with China before the August recess. Then please call your Representative and Senators at 202-224-3121, and ask them to support blocking this deal.

Here's the deal. The Obama administration issued a waiver of protective laws to allow Space Systems/Loral to sell key satellite technology to a company partially owned by a Chinese state-run investment company.  Loral was earlier fined for selling key missile technology to China in the 1990's which was used to improve their unreliable ballistic missiles. This technology can be used for military purposes.

America is the undisputed leader in space technology. But our lead is being eroded by both the theft and outright purchase of our most advanced technologies. Such technology can be used equally by China's military as it can for competing against the US in commercial markets.

Tech transfers and thefts helped the Soviets build their shockingly similar "Buran" space shuttle. This isn't a new idea; Stalin had a fleet of B-29 bomber clones built from one captured plane, and the Soviets became infamous for stealing and 'reverse engineering' our military technology throughout the Cold War. China's moon rocket, as revealed in a recent posting here, appears to draw upon designs for our Space Launch System (SLS). Loral's technology was previously used to improve unreliable Chinese ballistic missiles.

We must enforce, not waive, the laws to protect our technology, and thus our jobs, investments and patents. America cannot afford to give our competitors and adversaries a commercial and military advantage.

Congress has 28 days to block this dangerous sale of American space technology to China. Because Congress will adjourn on August 3, it is critical to call now, and to ask your friends and associates to call as well.

If we want America to have a bright future in space, and to not see China use our technology to underbid and destroy our growing commercial space industry, we must block this deal and all like it in the future.

Please help stop this dangerous sale of our high tech to China. Call Congress. Share this alert far and wide. Thank you.
No comments: 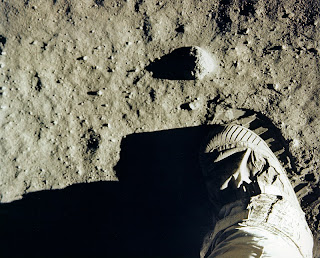 Ask anyone alive in 1969, and they'll all tell you exactly where they were when Neil Armstrong took that historic step onto the moon, on this very date 43 years ago!

Astrophysicist Neil deGrasse Tyson today commented this was "the only positive event in the last 50 years for which everyone remembers where they were when it happened." Indeed!

We need more such positive accomplishments; to return to the moon, go to asteroids and take that next breathtaking step onto the rust-red soil of Mars! Not one day in the far future, but to go to the moon and an asteroid as JFK said "in this decade" and go on to Mars in the mid 2020's.

It all started at the US Capitol 51 years ago when President Kennedy challenged our nation to go to the moon; "I believe that this nation should commit itself to achieving the goal, before this decade is out, of landing a man on the Moon and returning him safely to the Earth."
http://www.homeofheroes.com/presidents/speeches/kennedy_space.html

The nation rallied in support, and just eight years later made history for all time as Apollo 11 blasted off with Neil Armstrong, Buzz Aldrin and Michael Collins, travelled a quarter of a million miles, and the lander descended to the surface of the moon.

Neil Armstrong announced the landing with these words, "Houston, Tranquility Base here. The Eagle has landed." Few understood how close to disaster the astronauts were, for Armstrong had to take manual control and use up almost all the fuel to avoid boulders.

That's why we sent the "Right Stuff" to the moon!

Watch this remarkable video of Neil Armstrong narrating the final minutes of the landing in 2011 in the House of Representatives. Your author attended that hearing and witnessed this in person:
http://www.youtube.com/watch?v=lCXHcff0lFw 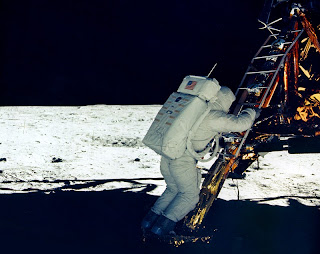 Then Armstrong descended the ladder as the world held its breath. Everyone who watched, including your author from his house in Washington, DC intently watched as Armstrong spoke, "I'm going to step off the LEM now."

His words echoed around the world as he took that step which will remain one of humanity's greatest achievements: "That's one small step for a man, one giant leap for mankind."

What were YOU doing on that date; your thoughts, emotions and memories? For those too young, what were your thoughts when you first learned of or saw videos of the landing? Please share your comments on this page!
2 comments:

It looks similar to our SLS--either through general design necessity or by copying our technology, and will be of similar payload and other specs. The payload to low earth orbit is 130-133 metric tons, as indeed is necessary for manned lunar missions.

They are going to the moon and beyond--are we?

A year ago the final space shuttle mission roared off the launch pad and into orbit and the history books.

In the year since Atlantis took that historic flight, has the administration set specific goals and timetables for NASA to allow it to focus like a laser beam on launching Americans to the moon, Mars and asteroids? Or by neglect is it still an agency adrift without specific long range plans for human exploration beyond earth orbit?

Sadly, a year after the last shuttle mission and more than two years after Constellation was cancelled, the essential goals and timetables have still not been set. During his short time in office, President Kennedy accomplished everything needed to send America to the moon.

The greatest tragedy in cancelling Constellation was not the billions of dollars lost and the years of delay added in getting the very similar Space Launch System (SLS) ready for construction. The greatest tragedy instead was the loss of NASA's specific manned deep space exploration goals, and the timetables to get there, resulting in confusion, poor morale, and an inability to properly plan and develop missions.

Simply to allow NASA to identify one specific asteroid and state "in 20XX we will go to this asteroid" would make all the difference for mission planning, public enthusiasm and Congressional budgetary approval.

America's national space strategy up to the point the White House cancelled it would have had the US return to the moon by 2019, begin construction of a lunar research base so we could learn how to live on Mars, and then go to Mars.

These specific plans were replaced by vague and undefined plans to go to an un-specified asteroid about 2025, and perhaps in the mid 2030's to either orbit Mars and return or to land. Without the intermediate learning step of a research base on the moon, a Mars mission would be far more hazardous.

It is almost impossible to accomplish such technically demanding and expensive tasks without a detailed and specific roadmap.

Had President Kennedy tasked Apollo with a similarly vague plan to "go to the moon sometime in the far future," we never would have gotten there. Perhaps funding could have been found for such a vague program, but the result would have been perpetual delays, cost over-runs and continual redesigns--exactly what plagues NASA today!

The contrasts with the precisely planned and executed Apollo program and today's rudderless NASA could not be more glaring.

The solution is to follow the successful example of Apollo and set specific timetables and goals--best articulated by President Kennedy in his 1961 address to Congress:

"I believe we possess all the resources and talents necessary. But the facts of the matter are that we have never made the national decisions or marshaled the national resources required for such leadership. We have never specified long-range goals on an urgent time schedule, or managed our resources and our time so as to insure their fulfillment."

The solution indeed is to follow JFK's wise advice and "specif(y) long-range goals on an urgent time schedule."

The stakes are higher than many may realize. America does not live in a vacuum in this world; and other nations will not patiently wait until we get our act in gear. They will happily seize for the next generation the lead we relinquish in high technology; and they will go to the moon, Mars and beyond--making it seem pointless to follow in their footsteps. It will be they, not us who reap the incredibly valuable benefits in patents and innovations, jobs, investments, and national pride and international respect.

China recently announced their plans to land on the moon by 2025, and last month completed a successful mission docking with their prototype space station. While the US is indeed building our moon/asteroid/Mars rocket--the SLS; specific plans, timetables and budgets for specific missions must be developed, or the space program which launched America to worldwide leadership in high tech could become an easy prey to budget cutters, leaving the US second-rate in an increasingly competitive world.

This is a call, on the occasion of the anniversary of the final shuttle launch, for the current or next administration to develop a serious and well-funded national space strategy which will see America continue to lead the world in technology, discovery and prosperity.


China's Shenzhou-9 manned space mission ended successfully, with important tests of both automatic and manual dockings, as well as testing of their Tiangong-1 mini-space station module. This is their most complicated space mission so far, and will help advance their plans for their next space stations, Tiangong 2 and 3.

Want a peek at how the Chinese view the purpose of this mission and their broader space program?

Americans would be wise to understand the same benefits would accrue to the US with a bold new space program.