Artemis Returns Americans to the Moon in 2024! 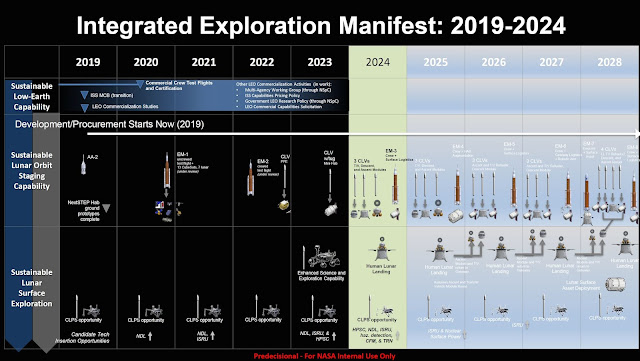 Following the Vice President's order to NASA to send a man and a woman to the Moon in 2024--which would be the first return in more than 50 years, industry and NASA have risen to the challenge. The above image is of NASA's new roadmap through 2028, with the landing in 2024.

Now named Project Artemis, the return will need lunar landers, many commercial and NASA launches, and the elements of a scaled down lunar-orbital "gateway." Blue Origin unveiled their lander concept, and NASA is preparing to award a contract for part of the gateway. To meet the 2024 deadline, many contractors must start to design and build elements this year.

The hard work is NOT building rockets or training astronauts--NASA and both new and legacy space industries know how to build rockets--after all, we learned how to do it 50 years ago, and your phone has far more processing power than the Apollo lander.

No, the hard work is all political.

Congress must now pass the necessary authorizations and appropriations or it won't happen, including the $1.6 billion supplemental appropriation. Space has always been non-partisan, and everyone in Congress should get behind this with enthusiasm. It helps further JFK's legacy, it continues American high tech leadership and global competitiveness, and it will inspire millions of students to go into STEM fields. It will also avoid a confrontation with China had we let them in our absence claim strategic locations of the Moon as their own, as in the South China Sea.

Unity of space advocates is essential. Some may favor a "moon first" or a "Mars first" approach to sending humans to Mars, but fighting the return to the Moon will only delay ever getting to Mars. So it's time to rally around this, the most bold plan to return to the Moon and then go to Mars.

The target of 2024 offers commercial space a golden opportunity to try to beat Boeing's Space Launch System and Lockheed Martin's Orion. The Vice President commanded that we will go regardless of who gets us there.

Moon 2024 is exactly the target the Coalition advised officials on in the campaign, transition, White House and Congress for the past three years.

So this is a new space race between legacy and new space. Build it! Fly it! SpaceX and Blue Origin: Build your rockets and landers! Bigelow and ATK Orbital: Build surface habitats! And others should be building life support, ice mining and processing equipment, space suits, and the thousands of other elements needed for that next giant leap.

The administration and NASA have hard work ahead, including promoting 2024 on the Moon to the American people. The media largely ignored this wonderful news, with the Washington Post drowning the story on page A-24 behind 50 other stories the paper thought more important. So you can help spread the great news on social media. The public loves space, kids will get enthusiastic, and it takes attention from the negative of politics to looking at the future of humanity.

Please call your members of Congress in support of returning to the Moon and in support of the $1.6 billion request to get started. 202-224-3121.