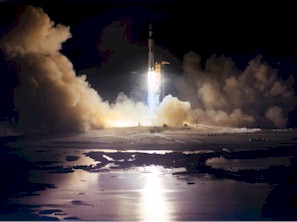 40 years ago on December 7, 1972, Americans blasted off towards the moon, and landed on the moon on December 11. This final moon mission broke records including the longest stay on the moon--over three days. Apollo 17's crew included geologist Harrison Schmitt, who was able to greatly increase our knowledge of the moon from his selection of rocks to return and his investigations while on the surface.

Now it's time to go back. Not just for a short visit, but go back "American Exceptionalism"-style in this decade, and live on the moon so we can learn how to live on Mars--then go to Mars!

To remain the leader in space and high technology for another generation, we must not sit back and watch as China and others pass the US, perhaps claim the moon as theirs, and reap the benefits in jobs, investments, patents and inventions, high tech leadership; and national pride and international respect.

To succeed, we need real leadership to define the goals and timetables, and to make the case for the necessary funding.

America CAN return to the moon in this decade, and start to construct a lunar base to learn how to live on Mars. America CAN visit an asteroid in this decade to gain deep space experience. And American CAN go to Mars by or before 2030.

YOU can help support our space program by calling Congress at 202-224-3121, writing letters to the editor, calling talk shows, and spreading the word to your friends on social media. Let's make the 40th anniversary of Apollo 17 an inspiration for rebuilding our space program.