Gov. Pence: ‘President Trump Will Lead America To The Stars!” 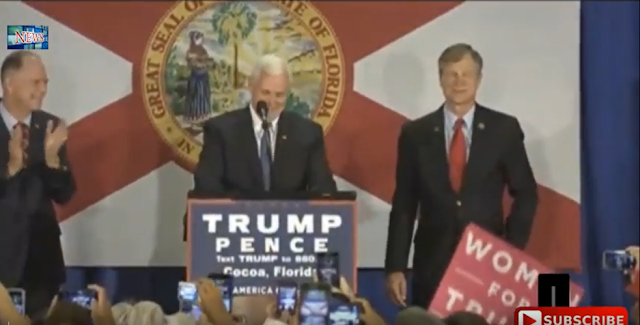 Governor Mike Pence gave a stirring speech to thousands of NASA and space workers on Florida’s Space Coast, declaring the Trump-Pence administration would restore our space program and focus on deep space exploration (Moon, Mars and beyond).

Flanked by the Space Coast’s own Congressman, Bill Posey, the Chairman of the House Space Subcommittee, Brian Babin of Texas, and the former Congressman from the Space Coast, Dave Weldon, Pence’s message was welcome news in a campaign where many worried the next president would continue Obama’s policies which dealt a near-fatal blow to deep space exploration.

Calling for plans to “lead America to the stars,” the audience cheered Pence’s plans to “focus the mission of NASA on space exploration,” which could allow Americans to return to the Moon and go to Mars, Pence set a high standard evocative of President Kennedy’s bold goals, “we all know that space is the final frontier. And just as we’ve always done before, America needs to lead the way on the final frontier!”

This was a powerful message of support and hope for commercial space, NASA and the greater community of space supporters across America, and offers the prospect of a very real “Journey to Mars” in marked contrast to Hillary Clinton’s likely continuation of Obama’s destruction of space exploration plans.

Pence would chair a revived National Space Policy Council which would restructure NASA to focus on deep space exploration, eliminate functions duplicated by other agencies such as global warming theory advocacy, structure new relationships with commercial space companies, and advance plans for launching Americans on deep space exploration missions during their first and second terms.

President Kennedy challenged America to go to the Moon, and just eight years later Neil Armstrong made the historic “one small step for a man, one giant leap for mankind.” The last eight years set America back by a decade or more in deep space exploration–which awarded China and Russia a similar head-start in very real space race, a point not lost on Pence who warned, “we cannot afford to fall further behind in space exploration or technology.”

A Trump-Pence administration would set NASA on bold, new course for breathtaking accomplishments in space within the next administration; to make America great again in space for real.


I have to tell you today as I stand here on the Space Coast, it is great to be back.
Because I’ve got to tell you, I was raised in a generation of kids sitting in front of black and white televisions, watching from afar what you all were living, here in Cocoa Beach.
I’m awful proud to think of the Mercury Program; the Gemini Program; the Apollo program. These are the anthems of my youth. The inspiration not just of America, but of the world.
I’m proud to say Perdue University in Indiana has educated more astronauts than any other university in America. And Gus Grissom grew up in Mitchell, Indiana.
Karen wanted me to point out to you we actually vacationed near Cocoa Beach just to be near it all, before I was ever even elected into Congress. When I was in the Congress of the United States, one of my very first assignments was to serve on the NASA subcommittee, at my request. And our families had the great privilege to be here to see those launches go into space. It’s been incredible to me.
And let me tell you something, Donald Trump and I have a plan. To make the American space program great again!
Our space program needs new leadership, and a new vision. And we’re going to work with the Chairman of the NASA subcommittee who was just on stage with me, Congressman Brian Babin, and we’re going to bring a new vision to America in space.
As Donald Trump has already said, we’re going to expand private-public partnerships to make sure we’re investing using all the resources of the most powerful nation on earth. We’re going to focus the mission of NASA on space exploration. We all know that space is the final frontier. And just as we’ve always done before, America needs to lead the way on the final frontier!
We cannot afford to fall further behind in space exploration or technology, and the Trump-Pence administration space policy will also strengthen our military space mission and assets, and reorient our civilian space program towards deep space and exploration.
We’re going to promote increased cooperation with the commercial space industry. We’re going to provide capabilities needed for our nation to maintain constant pressure in low earth and beyond.  We can be more efficient. We can be more effective. We can use space dollars wisely. But we’re going to do it. We’re going to make the investments, and we’re going to create a brighter and boundless future for America and a growing economy on the Space Coast for generations.
I’m especially excited about the fact that Donald Trump already announced that we’re going to relaunch the National Space Policy Council, headed by the Vice President of the United States of America.
Donald Trump and I are committed to partnering with the space community, working with each one of you in this great and historic place. To renew and reinvigorate our space program.  In a word, President Donald Trump will lead America to the stars!