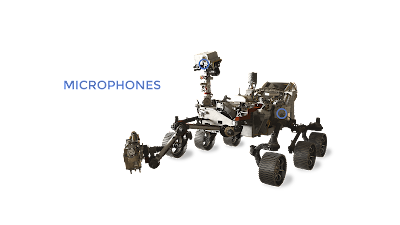 Following a picture-perfect launch, NASA's Perseverance rover is on the way to Mars--scheduled to land next February. One really cool thing onboard is a pair of microphones.

Yes! You'll be able to listen to the landing, the winds of Mars, and the sounds of the rover as it moves.


SuperCam can listen for about 3.5 minutes at a time while performing science observations. This gives the rover the chance to hear the sounds of Mars, such as the high-pitched sound of sand grains over the surface, the wind whistling around the rover mast, and low-pitched howls of dust devils passing by. The microphone also records sounds of Perseverance using its arm, coring rocks, and the wheels crunching against the surface. The rover may hear the other instruments, internal mechanisms, and hear when we drop off the sample tubes. In some cases, sound can help the team diagnose the health of the rover's internal mechanisms or instruments.