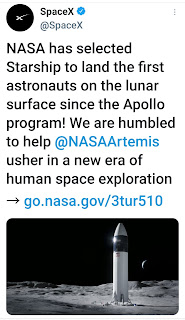 Congratulations to SpaceX for winning the contract for the human lander for the Artemis project to the Moon.

NASA has awarded to SpaceX the sole $2.89 billion contract to land Americans on the Moon. Most had expected NASA to select two landers from the three awarded an earlier development contact: Dynetics, Blue Origin and SpaceX's Starship. While redundancy is vital in human spaceflight--Commercial crew was awarded to both SpaceX and Boeing, it is possible the single award was made for budgetary reasons (ridiculous in an era of multi-trillion spending bills).
Current plans would call for astronauts to be launched on Orion to the Gateway, then transfer to a Starship for the descent to the Moon. And do the reverse for the return trip.
On the surface, this is incredibly overcomplicated, involving completion of the expensive Gateway, launches on SLS/Orion and a launch by a Starship. If NASA is going to use Starship as a lunar lander, it makes more sense to do a Moon-direct flight on Starship and cancel the Gateway. That would make 2024 more possible.
Now the administration has to back up the award with funding, and the just released budget request has only minor funding for the lander. The contract raises many questions that require clarification.
Congress must fully fund the lander and should cancel the Gateway.
Call Congress at 202-224-3121.