Apollo 11 and the Democratization of Space 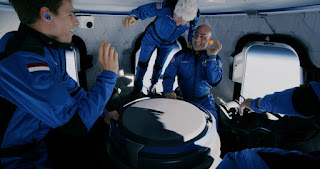 July 20 will always be remembered for the historic landing of Apollo 11 on the Moon in 1969. This year, the anniversary shares the date with the opening of commercial space ventures. Blue Origin, led by Jeff Bezos, achieved its first passenger flight to space, following by just days Richard Branson's flight to space on Virgin Galactic.

This is huge, and ushers in the era of the democratization of space travel, that in coming years and decades will eventually bring suborbital and orbital flights at prices affordable to millions.

You can see the parallels in your life. The first flat panel TVs cost a fortune, but now huge TVs are available everywhere for a few hundred dollars. Early computers filled buildings and cost millions until Apple and IBM invented personal computers--and today you carry a phone far more powerful than the Apollo spacecraft computers. Likewise, air travel was initially so costly that only the wealthy could fly coast to coast, but for many decades now, domestic and international flights have been affordable for the millions. See, it took the efforts of the creative and determined relative few to bring these ideas to market and through mass production in our free enterprise system, make them affordable and plentiful.

The next step will be orbital flights by SpaceX, Blue Origin and others, where you will be able to travel anywhere on earth within an hour or travel to orbit--and in less than 20 years, these may cost little more than a luxury cruise.

Oddly, some are criticizing Branson and Bezos for their incredible achievements. Envy? Perhaps they would have similarly criticized Henry Ford, Thomas Edison, Alexander Graham Bell, Steve Jobs, Neil Armstrong and all the other 'right stuff' doers, inventors, developers, and creators that built the most prosperous and healthy society in the history of mankind.

The future of humanity will include hundreds, then thousands, then millions living and working in space, with cities in orbit and on the Moon and Mars. Children will point with awe at the lights on the Moon. The question is will it be a future of freedom in space as developed and protected by the U.S., or a dystopian future of tyranny on and off earth, all owned and controlled by China's dictators?

Neil Armstrong, Buzz Aldrin and Michael Collins pioneered the way, NASA is on the path to returning Americans to the Moon--hopefully by 2024, and now private entrepreneurs will bring space travel to the thousands and eventually the millions.

Humanity advances and during this lunar landing week, we should all applaud not only the Apollo pioneers but the new generation of spacefarers who may indeed sell you a ticket to space.