Artemis to the Moon! Aug 29 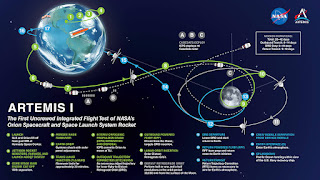 Mark your calendar for August 29 at 8:33 AM EDT for the spectacular launch of Artemis I, the 42-day uncrewed NASA mission to the Moon. Backup dates for weather or technical issues will be on September 2 and 5.

If you've never watched a rocket launch in person--or if you've seen many, consider going to the space coast in Florida to see and hear the launch. The launch will be carried all over the news and social media, and at NASA.gov/live.

This will be the greatest 'shakedown' mission ever, which will set the stage for launching American astronauts first to lunar orbit on Artemis II, and then in Artemis III to land on the Moon perhaps by 2025 for the first time since Apollo 17 in 1972.

Read NASA's detailed 124-page booklet with all the facts on the rocket, spacecraft and the incredible test mission:
https://www.nasa.gov/sites/default/files/atoms/files/orion_reference_guide_0.pdf

The complete system for Artemis III will include the Space Launch System (SLS) rocket and the Orion spacecraft to launch our astronauts on Orion, which will then rendezvous with a SpaceX Starship spaceship that will carry the crew to and from the Moon. Following their time exploring the Moon, the astronauts will transfer back to Orion for the return to Earth and worldwide acclaim.