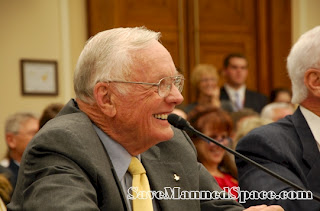 We can't just silently watch as NASA gets cut and future missions like ExoMars cancelled.

We will not find space friendly to free enterprise and American presence if China, Russia, Iran, North Korea and other dictatorships write the rules in the UN.

Private space industry has few friends in the world outside of a few allies, and we will not want to see our initiatives blocked, taxed, regulated to death or even entirely banned by the majority of non and partially free nations.

We must use Armstrong's legacy as a rallying point to launch a bold new space program. Neil deGrasse Tyson has the right message: call for 1 cent for space. Then we will see new footprints on the moon and asteroids in THIS decade, and footprints in the red dust of Mars in the 2020's!

To do otherwise is to surrender our future and no way to honor Neil Armstrong's legacy. To abandon our nation's leadership in space and let China become the space superpower for the 21st century. To watch as China and Russia reap the rewards in jobs, inventions, investments, and national pride/international respect.

Read "How China May be the Next to Land on the Moon" for a preview of China's future in space:

Let's demand that the next administration and Congress relaunch our space program to take us back to the moon where we can learn how to live on other worlds, to a few asteroid to gain experience in deep space travel, and then on to Mars!

Not somewhere vaguely in the far future, but to the moon and an asteroid by the end of this decade, and landing, not just orbiting Mars in the 2020's!

This IS possible, both technologically, and with Tyson's "one cent for space" economically. We need SLS as the Apollo-size rocket to get us to the moon, Mars and beyond, Orion and landers. Scrap SLS/Orion and we add at least a decade and billions more just to return to where we are now. We'll need habitats and a Mars soil return mission. Experience living on the moon will assure living on Mars is safe. But that's just hardware--most of all we need you!
One cent for space--let's make that be Nail Armstrong's legacy that launches America back to a bold future leading in human space exploration! It'll take everyone pushing together as one unified voice to make this happen, so let's roll!