Can YOU go to Iowa and New Hampshire to Advance Space Exploration? 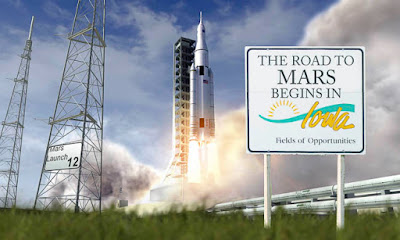 The Road to Mars Begins in Iowa and New Hampshire

Are you in, or can you visit Iowa, New Hampshire, or any of the other primary states?

The candidates and their senior staff are there now. They are greeting people in coffee shops and diners, and hosting small forums--and they WANT to talk to you.

Please read the linked article: Given current plans and a lack of strong leadership, NASA might not land Americans on Mars until the late 2030s or even into the 2040s.

However, every accomplishment we strive for in space exploration--landings and bases on the Moon and Mars, and much more all could be accomplished in the 2020s and 2030s. It all depends on leadership and willpower, and what we as space advocates do here and now.

From Mercury to the Apollo 11 landing on the moon took Americans just eight years, and with the amazing advances in technology since the 1960s, we should be able to make progress much faster.

The only reason NASA currently has no plans during the next ten years for deep space exploration other than a single test flight of Orion and the nearly useless Asteroid Redirect Mission is a lack of leadership or desire to lead the world in space exploration.  It's not a function of technology.

Here's the vital point: the next president will have the opportunity to put us on track to great accomplishments in space--if the candidates hear from you now.

This is the time to go to Iowa, New Hampshire and the other primary states, and have serious talks with the candidates or their senior staff about why remaining the leader in space exploration is essential to our economy, high tech competitiveness, national security, as well as inspiring students for STEM careers. Why exploring the Moon and Mars will reap great benefits for all Americans. Why space exploration is 'American exceptionalism' defined. And why replacing the Asteroid Redirect Mission with the inspirational and essential 2021 Mars-Venus flyby will put us back on track for a serious space program.

Some candidates might have no position or interest on space exploration, or even feel it is just a waste of funds. They may not understand the great return to our economy and high tech competitiveness. If candidates understand the value, they will confidently out-bid each other in support for the space program, rather than act defensively to ridicule it.

Consult this list of primary dates for the balance of the primary season.

Be aware that talk of humanity becoming a spacefaring species or colonizing Mars will scare away politicians and backfire. That was the lesson from the 2012 campaign, when Newt Gingrich was attacked in the media and by other candidates for talking about a Lunar colony. Keep it realistic and focused on what politicians can accept and what the media can't attack.

Your action can help candidates realize the importance of a strong space program, and help result in a pro-space president, no matter who wins.

Contact us for more information, and let us know of your meetings and results.