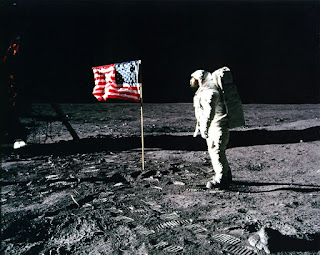 The culmination of all the events set in motion by President John F. Kennedy's stirring speech to send American astronauts to the moon "in this decade," started with the breathtaking launch of Apollo 11 on July 16, 1969. Riding atop the mightiest rocket ever built, Neil Armstrong, Buzz Aldrin and Michael Collins soared to the heavens in a flawless and spectacular launch, with millions of spectators lining the Florida space coast.

Arriving into lunar orbit on July 20, they prepared for the momentous landing, and on July 20, Neil and Buzz climbed into the lunar lander and began their descent to the moon. Neil saw the autopilot was leading the lander to a dangerous area with craters and boulders, and he took over the controls and flew it to a safe and flat area.

For all time, Armstrong's words will be remembered and revered. "The Eagle has landed." "That's one small step for a man, one giant leap for mankind."

Words still cannot convey the full magnitude of the achievement, nor the efforts of 400,000 NASA and contractor employees who got the astronauts, as well as the eyes and imaginations of every American and everyone on earth.

During Neil Armstrong's last testimony to Congress, where I was present, he narrated the decent and landing on the moon. He describes his thoughts at the time. Watch this remarkable first-person account:

The landing on the moon shall always be remembered as the greatest feat of mankind. Now it is time to recommit our great nation to return to the moon by 2024, an usher in a new renaissance of space exploration and industry.

President Trump's commandment to NASA to achieve this within five year deserves full support by Congress--you can help by urging your members of Congress to support this, the next "great leap" in human history.