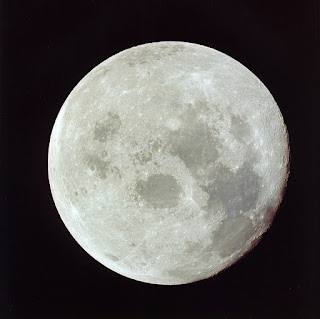 The Moon from Apollo 11 Lunar Transit

The second day of Apollo 11 was a true journey into outer space.

Having left behind the earth, gotten a ‘night’s’ sleep, and with the moon more than a day in the future, Neil Armstrong, Buzz Aldrin and Michael Collins were occupied with checklists and a great many adjustments and procedure, many of which were manually performed, as well as a mid-course correction burn of the engine. They exercised and ate meals, and periodically rolled the spacecraft to distribute heat from the sun.

Their communications reveal few expressions of the beauty of space, and were mostly business-like in performing a multitude of vital tasks. This is ‘the right stuff.’ Laser-focused.

Samplings of communications between the crew and Houston show the relaxed attitude of the crew as they worked:


024:45:35 Collins: It’s really a fantastic sight through that sextant. A minute ago, during that Auto maneuver, the reticle swept across the Mediterranean. You could see all of North Africa, absolutely clear; all of Portugal, Spain, southern France; all of Italy, absolutely clear. Just a beautiful sight.

Each of the three had done an orbital mission in the Gemini program, but there might have been something entirely different in leaving the somewhat familiar orbit of earth; to leave behind our world. Outside the windows it was either the black of space, the sun, or a diminishing earth and a growing moon. Here’s Buzz Aldrin describing one view:

034:18:28 Aldrin: We see out our side windows the Sun going by and, of course, out one of our windows right now we’ve got the Earth. Right behind my window, of course, we have the Sun, because the Sun is illuminating the star charts that we see. This line represents the ecliptic plane and these lines, vertical lines, represent our reference system that the spacecraft is using at this time. As we approach the Moon, the Moon will gradually grow larger and larger in size and eventually it will be in eclipse. It will be eclipsing the Sun as we go behind it, as we approach the Lunar Orbit Insertion maneuver.
In this video you can see views in the command module and watch the crew exercising.


While day two was relatively relaxed, the tasks in preparation for the landing would increase on day three.