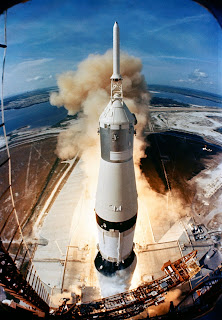 Imagine this: It is July 16, 1969, and hundreds of thousands of people camped out near the Kennedy Space Center overnight waiting for the launch of Apollo 11. Millions more around the world are glued to their TVs and radios, awaiting the magical moment. It's a bright sunny morning and Apollo 11 is gleaming on the launch pad as technicians check the million-plus systems that all must work perfectly.

The astronauts wave to the cameras as they depart for the pad, and ascend 365 feet to the top of the Saturn V rocket. The hatch is closed and the world awaits...

All systems are GO! The time is 9:32 AM. The world holds its breath!

Apollo 11 is now in orbit. Two hours and 44 minutes later, the engines fired to take the spacecraft out of earth orbit and towards the moon, still a quarter of a million miles distant.